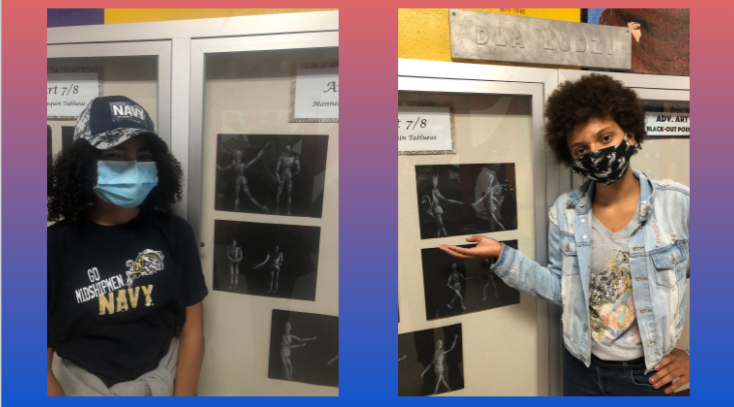 Art students in front of their features.

Duke’s main inspiration for her piece was the children’s novel Wonder, by author R.J. Palacio. The tableau made by Duke represents a plotline in the book between characters Olivia and Miranda. Duke commented, “I would like for people to notice… the way the values gradually get higher or lower,” which shows that the most important part of the piece to Duke when making it was the finer touches. As a result, Duke encountered many struggles while developing the feature. Moreover, Duke went on to claim, “I was dumbfounded on how I was supposed to do that,” and, “I kept on discouraging myself.” In short, Duke desired perfection in her piece, but she eventually decided to focus on mimicking the picture the best she could. In the end, it seems that Duke is mostly happy with the final product, but she feels that the piece would have been better had she chosen either a more creative storyline or a prop.

River Shelley’s piece had a great focus on symbolism and duality in people, drawing great inspiration from the idea of a devil versus an angel. It depicts an angel with a knife behind its back facing a demon holding a flower to give to the angel. Shelley voiced that she wanted to flip the traditional meanings that were usually linked with devils and angels, as well as show that people are not always as they seem at first sight. Shelley voiced, “…the devil had a flower to show that even seemingly mean people have a softness to them and people like the angel (who is holding a knife) aren’t always what they seem.” showing that she put a substantial amount of thought into what her piece represents. Shelley wanted people to notice the duality of her piece; she mentioned that it was difficult to capture the light logic of the piece, and commented, “…if you allow yourself to have fun it becomes easier as you go.” Shelley is extremely happy with the outcome of the project.

Overall, both artists tried their best to make their pieces meaningful and appealing to the eye. It appears that they are happy with their creations, so it is clear how much effort they put into making their additions to the gallery as exceptional as possible.