Turkey Day- The Day of Giving Thanks 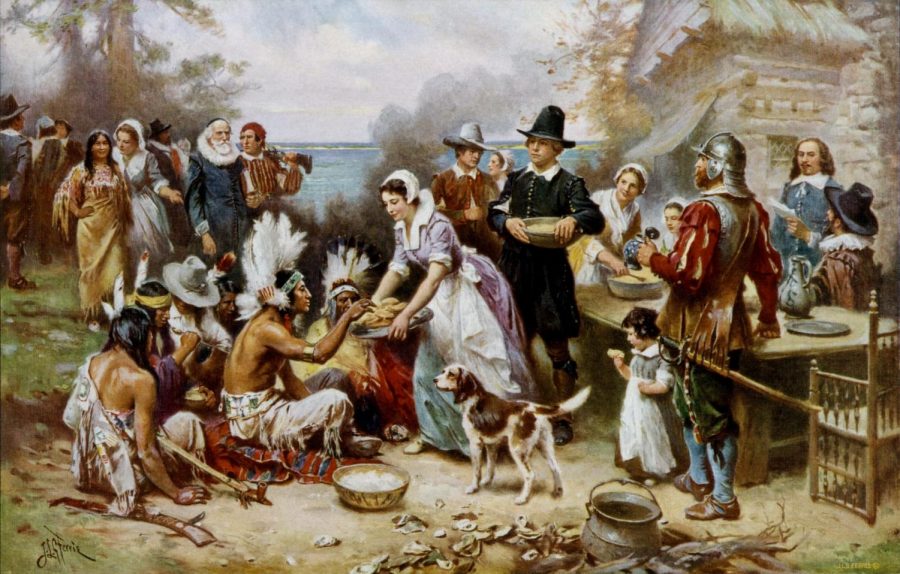 A painting of what the first Thanksgiving may have been like.

Turkeys, gratefulness and family- these three words remind many people of the  holiday called Thanksgiving. This year, Thanksgiving will be on Thursday, Nov. 26; this occasion always takes place on the fourth Thursday of November.

Many know the origin of Thanksgiving, whether it is from a video or an article. In September of 1621, a ship called the Mayflower left England, carrying 102 passengers in search of religious freedom in the New World, or as it is called today, North America.

Upon arrival, the Pilgrims experienced a harsh winter, and many of them died of sickness. “Only half of the Mayflower’s original passengers and crew lived to see their first New England spring,” states the History Channel online site. Fortunately, the Pilgrims met the local Native American tribes, who were friendly. One who was called Squanto taught the Pilgrims useful skills such as how to grow corn and catch fish in rivers.

As a show of their gratitude, the Pilgrims held a feast and invited the Native Americans to join them. This was known as the first Thanksgiving, and it lasted for three days.

According to Wilstar, a website that is focused on social impact and people who change the world, “Most families observe with a large meal and sometimes a religious service [for Thanksgiving].” Regular Thanksgiving holiday foods include turkey, stuffing, gravy, mashed potatoes and cranberry sauce. “My favorite food is stuffing,” states Hailey Peterson, a seventh-grade student at McAuliffe. “Whether I’m with my dad or mom for Thanksgiving, I always have a lot of family over and we have all different types of food.”

A common symbol of Thanksgiving is the turkey, a delicious delicacy for a feast.  Additionally, Thanksgiving can also be called Turkey Day. “Turkey, a Thanksgiving staple so ubiquitous [meaning “seen everywhere”] it has become all but synonymous with the holiday, may or may not have been on offer when the Pilgrims hosted the inaugural [meaning “to mark the beginning of something”] feast in 1621,” says History. This means that even though the turkey is such a common Thanksgiving symbol, it may have not been on the menu for the first Thanksgiving.

During Thanksgiving, many people express gratitude or thankfulness, whether it is for family, a home, or anything else one can be grateful for. This year at McAuliffe, ASB has created Gratitude Grams, which is when a student fills out a provided Google Form to say how thankful they are for a specific McAuliffe staff member. After that, the message gets sent to the staff member.

Thanksgiving’s unique history has shown how appreciative people can really be, from giving to thanks for being saved out of a freezing winter to letting a teacher know they appreciate getting help with homework. From the tasty turkey and stuffing to the Pilgrims and Native Americans, the holiday of Thanksgiving sure is a special one!