The Explosion of K-pop 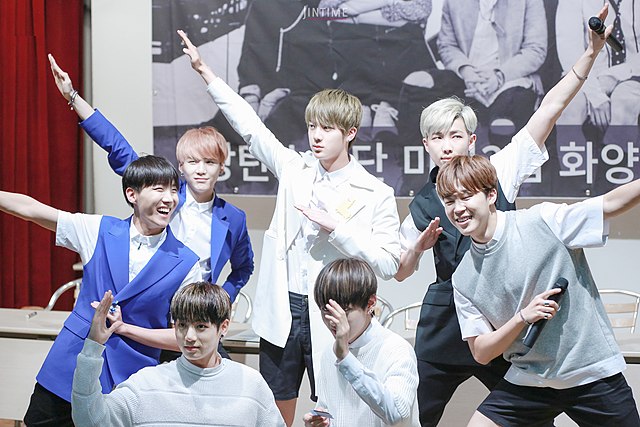 You likely have a friend or two that is interested in K-pop, or maybe you enjoy it. Somewhat familiar, but still almost brand new, K-pop has gone from a widely unknown subgenre to a Billboard-topping, show-stopping phenomenon.

The term K-pop was popularized in the 2000s, not long after the first K-pop group, Seo Taiji and Boys, was formed, though it got its start as early as the late 1800s. Korean singers, such as the Kim Sisters, made work for themselves by singing to U.S. army troops in the 50s, and it’s only grown from there. Modern K-pop began to gain appeal because of its unique composition, a combination of different styles of music, such as hip-hop, RnB, electric, and rock. It’s because of these fresh beats that Americans have taken such an interest in it.

Another reason why some older fans might enjoy K-pop is that the groups are reminiscent of boy bands. Boy bands also grew in the 1990s; they reached peak popularity in America and have never quite bounced back. K-pop groups are a different kind of boy band, though there are female K-pop groups, too.

There are a vast amount of K-pop groups out there, so it’s impossible to list them all. Some of the most popular ones are Girl’s Generation, BlackPink, and most well-known, BTS, or Bangtan Boys. BTS strikes a chord with many fans because of their inspirational messages and engaging performances. “My favorite K-pop group is BTS. I love this group so much because they are very inspirational,” seventh-grader Rianna Norman discloses. The groups often make fast-paced dance videos to go along with their music, so there is truly more to K-pop than what meets the ear.

Since the introduction of K-pop, Korean music isn’t the only part of Korean popular culture that has found its way into our lives. Hallyu is a word meaning “The Korean Wave” or the growing popularity of Korean pop culture in America and other countries. Hallyu is not just the influence of Kpop on young Americans; it’s the rise of Korean food, Korean dramas premiering on Netflix, and Korean products reaching store shelves.

Overall, the reasons why people are attracted to K-pop music are personal. “I’m a dancer, so I like happy and more vibed-up songs, so K-pop kind of shows that more,” sixth-grade Maya Fancher vocalizes. Though most of the nation is in love with K-pop now, will the buzz ever end?

“I think it won’t last when we’re older…maybe ten more years,” Fancher suggests. Overall, no matter how long this craze lasts, this past decade will be remembered for what is possibly one of the fastest-growing music trends of all time; the incredible sensory overload that is Korean pop music.