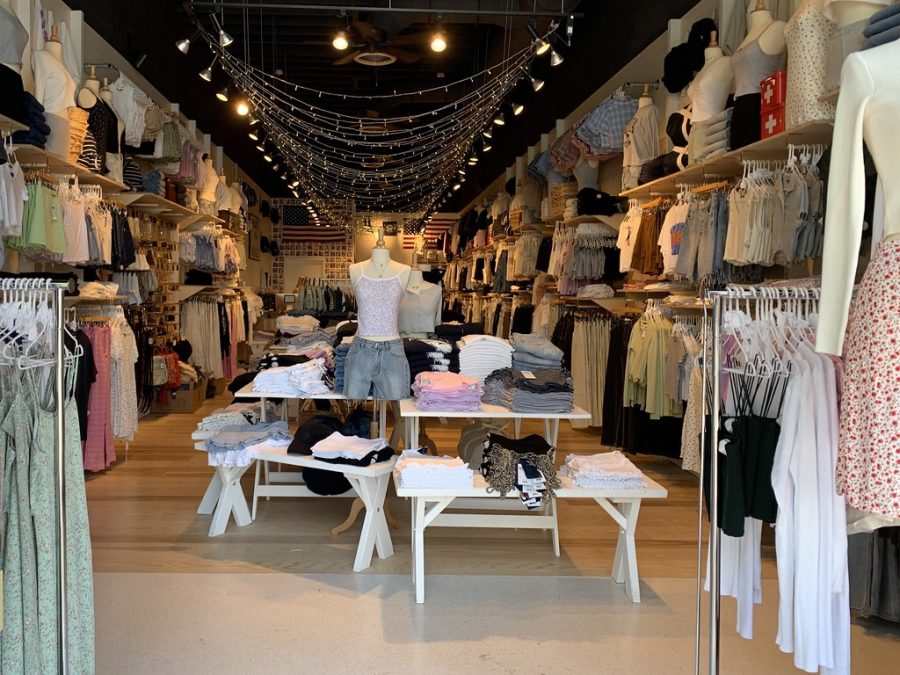 There are many different clothing stores in the fashion world today, but a select few have gained popularity among teens over the years. Some of these stores are Brandy Melville, Lululemon, PacSun, Levi’s, and Nordstrom.

Brandy Melville is one of the most popular clothing outlets among teenage girls. There are approximately 95 stores internationally and this fashionable clothing brand is also sold in Nordstroms and Pacsun. It was developed by Silvio and Stephan Marsan in 1970. The clothing chain has gained controversy over the years due to their “one size fits all” policy. Even though most people do not agree with this, their trendy clothes have teens coming back for more. Alexis Zerpoli, a seventh-grader at McAuliffe Middle School, thinks it’s because “everyone is wearing it and people don’t want to miss out.”

Another popular clothing store is Lululemon. Mostly known for their comfortable leggings and workout attire. Their long-lasting leggings have gained them popularity over the last few years. They might be expensive, but their lifetime warranty has led to loyal customers. Olivia Mlouk, a seventh-grader at McAuliffe, stated, “Even though they might be expensive, the lifetime warranty interests me and keeps me coming back.”

There is also a popular clothing brand called PacSun that sells everything from accessories to shoes. This store has something for everyone. There are 700 total stores in the world and this store also sells brands such as Volcom, Rip Curl, Hurley, and more.

Additionally, Levi’s is most known for their cute, trendy jeans. The store sells clothes for everyone, but is a favorite among teenage girls. Unlike Brandy Melville, Levi’s inclusive size range has people feeling comfortable and wanting more.

Like Pacsun, Nordstrom sells pretty much everything you are looking for, but on a larger scale. Nordstrom has face products, clothes, shoes, and even its own cafe. It sells many other small brands along with distributing their own. This brand has 379 stores in North America and they don’t plan on stopping anytime soon!

Trends change from year to year, but these stores continue to be a favorite among teens today. If you are interested in these brands, you can find them at Pacific City in Huntington Beach, Fashion Island in Newport Beach, or PCH and Second in Long Beach.